The founding father of our Dyckman family was Jan Dyckman, who arrived in New Amsterdam in the 1600’s from Westphalia. By the time of the American Revolution, the Dyckman family homestead was located roughly near 210th Street and the East River and Jan’s grandson William had inherited Dyckman land from his father. During the British occupation of Manhattan in 1776-1783, William Dyckman and his family sought refuge in upstate New York.

When the War ended, William returned to find the family home and orchards destroyed. It is believed that he immediately began building a new house, but chose a new location — directly on Kingsbridge Road (Broadway). When William died in 1787, the family initially advertised the property for sale but ultimately his son Jacobus took over the house and farm. However, the ad is excellent documentation of how much work the family and slaves had done to rebuild the farm in less than five years (see below for full text of the ad.)

Jacobus moved into the farmhouse around 1793 and inherited a modest farmhouse that he would alter significantly over the next several decades. The makeup of the household also changed drastically over the years as family members died or moved away and household help transitioned from slave to free. Jacobus and his wife Hannah had eleven children, yet most of them were born before they moved to the house. Hannah died in 1814, a time when there was already a great deal of loss within the family. Between 1809 and 1822, Jacobus lost four sons, a grandson, a daughter and his wife. By 1820, there were 10 people living in the household. Jacobus was the head of a household that included: three of his sons (Jacob, Isaac and Michael), his young grandson James Frederick Smith, his niece Maria, one unidentified white woman, a free black woman, a free black boy and one enslaved male.

There were also roughly 20 people living in three other houses scattered across the roughly 250 acre farm. The residents included laborers and other Dyckman family members.

Jacobus would add and subtract land to the family holdings but during the 1820 period it was roughly a 250-280 acre farm. The boundaries of the farm would have stretched from river to river east to west, and from roughly modern-day 213th Street to the north down to the 190s to the south. The farmyard, the area right around the farmhouse, included the main outbuildings for the farm, including a cider mill, corn cribs, barn and stable.

Because of the rocky terrain in Northern Manhattan, only certain areas would have been be appropriate for crops such as corn, cucumbers, cabbage and hay. Other areas were ideally suited for fruit orchards with cherry and apple trees. The inclusion of a cider mill within the farmyard indicates that there were enough apple trees to make that a cider mill was worthwhile. We do not yet know if or to what extent the Dyckmans brought produce to market. Since the family left no records of the farm, this remains a topic for further research.

The farmhouse consisted of two large parlors and two small bedrooms on the first floor. These small private bedrooms would most likely have been used by Jacobus, as head of household, and Maria, as a young female family member.

It is believed that the second floor was one open space up until the 1820s when it was divided into the separate bedrooms still present today. Jacobus’ sons and grandson probably would have slept in this space.

Jacobus lived in the farmhouse until his death in 1832. His sons Isaac and Michael continued to live in the farmhouse until the early 1850s when they moved to another house on the property. When Jacobus’ last son, Isaac, died in 1868, he left a will which clearly dictated how the family land was to be divided.  If James Frederick Smith, the young grandson of Jacobus who moved into the farmhouse in the early 19th century, agreed to change his name to Isaac Michael Dyckman then he would inherit money and specific plots of land. The rest of the property, which added up to about 340 acres and included the Dyckman farmhouse, Isaac stipulated should be sold with the proceeds going to various Dyckman family members.

In accordance with Isaac’s will, the land was sold at four separate auctions held between 1868 and 1871, ending the Dyckman family control of a huge portion of the neighborhood and opening the area up for future development.   James Frederick Smith changed his name to Isaac Michael Dyckman and inherited the land and money willed to him by Isaac.  The newly named Isaac Michael Dyckman eventually had  two daughters who would ultimately be responsible for the preservation of the farmhouse in 1915-1916. 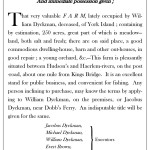 Text of the 1788 sale advertisement of the Dyckman property. 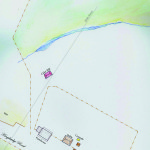 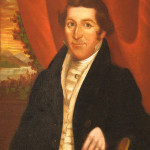 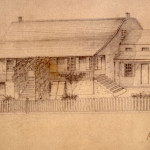 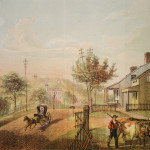 1866 Lithograph of the Dyckman Farmhouse. 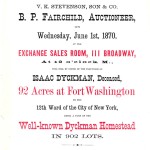 June 1870 auction of some of the Dyckman farmland.