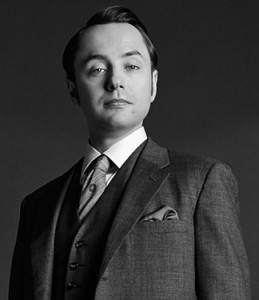 We always know when a new season of Mad Men is ready to air because the questions we receive about Pete Campbell’s heritage sharply increase.

Yes,  Pete is a fictional character on a television show. Now, let’s ignore that and treat him just like any other person claiming to be a Dyckman descendant. Does Pete’s story match the actual history of the Dyckman family?

We usually ask those inquiring about their Dyckman heritage to tell us what stories they have in the family and to which Dyckman descendants they believe they are connected. Peter Dykeman Campbell is the son of Dorothy Dykeman Campbell and a few tidbits of family lore are strewn throughout Pete’s storyline.

*They spell their name Dykeman rather than Dyckman.
TRUTH: Many of the family members chose different spellings so this doesn’t immediately raise suspicion.  Although, it is interesting that the Dykeman spelling is most common among the Canadian wing of the family – descended from a loyalist who moved to Nova Scotia after the Revolutionary War.

*The Dykeman’s owned pretty much everything north of 125th Street.
TRUTH: No, they didn’t, but this is pretty common folklore.  It is an extreme exaggeration of the true story that the Dyckman family did own large chunks of property in Northern Manhattan.

*They had an orchard at 204th Street.
TRUTH:  The Dyckman family did indeed have orchards in Northern Manhattan and by the early 19th century they had a cider mill located slightly south of the Dyckman Farmhouse  – which would place it at what is now 204th Street.  This portion of Pete’s story makes it appear that his family is trying to connect themselves with our wing of the Dyckman family.

*A great-great or great-great-great aunt got into a fight with a British soldier and a Hesssian.
TRUTH: This isn’t the craziest story we’ve heard, but we can’t say this is true.

*His great-great-great grandfather was named Nicholas Dykeman and was a farmer with Isaac Roosevelt.
TRUTH:  Sorry, this is all fiction. There is no Nicholas Dykeman in the family genealogy and there isn’t any known farming connection between the Roosevelt and Dyckman/Dykeman families.  It is interesting that Pete is only claiming a connection as far back as a great-great-great grandfather Dykeman, making him fifth generation. If he were part of our Dyckman family he would likely be part of the 9th or 10th generation and would be able to claim a connection to the first Dyckman to arrive in New Amsterdam.

*Nicholas Dykeman was buried at the Church of the Intercession.
TRUTH: The Church of the Intercession is indeed located in Northern Manhattan, currently at Broadway and 158th Street.  It was first established in 1846.  The nearby Trinity Church Cemetery and Mausoleum was founded in 1842.  While it is certainly possible that extended Dyckman relatives were buried there, the family actually had their own burial ground located on the family farmland.

*His great-great grandfather was named Silas Dykeman.
TRUTH: Sorry, no Silas Dykeman in the family genealogy either. Normally after two-strikeouts we suggest that people check out the Johannes Dyckman family. Johannes Dyckman arrived around the same time as our family founder Jan Dyckman. However, the two were unrelated. This leads to quite a bit of confusion in tracing genealogy.

*Pete’s grandfather Dykeman (first name unknown) lost the family money in 1929.
TRUTH:  It would certainly not be surprising that with such a huge number of Dyckman descendants there were family members who lost their money in 1929, as so many in America did.

The stories told about Pete’s family history are not that far off from many of the genealogy inquiries we get.  Family history can be a bit like the old game of telephone – facts become a bit distorted over time.

So, is Pete one of our Dyckmans? Based on the evidence, we would really have to call his bluff  by unveiling the family as pretenders. Unless, of  course, perhaps he chose to make a sizable donation in support of the farmhouse?