By far the most common reaction to the low ceilings at the Dyckman Farmhouse Museum is the comment “Well, people were shorter back then!” That always spurs great conversations among staff and visitors as we try to explain the truth behind the myth. 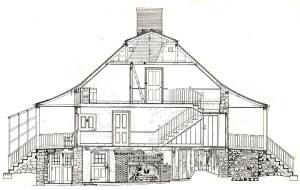 Imagine Northern Manhattan after the devastation of the Revolutionary War. Homes and fields destroyed, trees chopped down for the construction of military huts or burned for warmth. The first priority in returning would be to provide shelter for your household. The Dyckman family did this by building a small, practical farmhouse.  Lower ceilings required less material and less labor. In the winter, the lower ceilings also helped keep heat within the rooms.

The ceilings at the farmhouse range in height from just under 6′ to about 7 1/2 ‘. We often encourage our visitors to compare the farmhouse to our sister sites Morris Jumel Mansion and Van Cortlandt House. Both houses are several decades older than the Dyckman Farmhouse. However, they have quite tall ceilings in the entertainment spaces. The parlors at Van Cortlandt have ceilings that are 10′ tall. The tall ceilings aren’t to accommodate the extreme height of the Van Cortlandt family. Rather, Van Cortlandt House and Morris Jumel Mansion were built as much grander homes meant to impress, while the Dyckman family built a modest farmhouse at the center of a working farm.

If these reasons still don’t convince visitors that the low ceilings are not about the height of the people living here, we ask that they consider the scholarly studies investigating the average height of Americans over time. These studies show that around the Revolutionary War, just before the farmhouse was built, the average height of a white male was about 5′ 8″. This shocks most of our visitors. Today’s average for a male American is about 5’10”. While height certainly depended on a number of factors  it is clear that the average height in the late 18th century was not the reason for the low ceilings at the Dyckman Farmhouse.

Centers for Disease Control and Prevention http://www.cdc.gov/nchs/fastats/bodymeas.htm
Fogel, Robert W., Stanley L. Engerman et al. “Secular Changes in American and British Stature and Nutrition. The Journal of Interdisciplinary History, Vol 14, No.2.  page 463.
Gould, Benjamin. Investigations in the Military and Anthropological Statistics of American Soldiers. NY: Hurd and Houghton, 1869. https://archive.org/details/investigationsi00goulgoog
Travers, Carolyn Freeman. “Were They All Shorter Back Then?”  Plimoth Plantation.