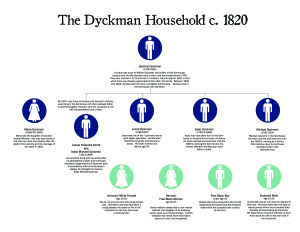 We frequently use this chart to explain who was living in the farmhouse in 1820 – both Jacobus Dyckman and his family as well as the servants and enslaved worker.  So, it is NOT a full Dyckman family tree.  When looking at the chart visitors often assume that none of the family members married because there are three bachelor sons listed in 1820.

The three bachelor sons shown on the chart are just three out of the 11 children of Jacobus Dyckman and his wife Hannah.  Of those 11 children, eight died before the age of 35. The 12 years between 1803 and 1815 were particularly difficult ones for the family with the loss of nine family members.

Three out of the 11 children married and had children of their own.  Jacobus and Hannah ultimately had 16 grandchildren. Two of their sons who married died before 35 and left behind widows and very young children.

The youngest four sons of Jacobus and Hannah never married.   James/Jacobus Jr. died unmarried at the age of 23.  Jacob, supposedly dealing with a heart condition for much of his life, died of tuberculosis at age 34.  The two youngest sons, Isaac and Michael, remained with their father and took charge of the large family farm.